Congratulations to our 2020 Songwriters Competition Winners

The Annual Podunk Bluegrass Festival’s songwriting contest gets underway annually on November 1. Songwriters have until May 1 to enter. The top three winners will receive cash prizes and other amenities, including the opportunity to perform their song on stage during the upcoming festival. 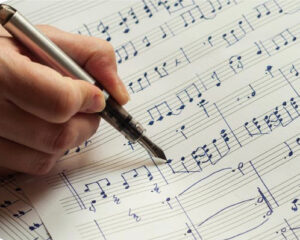 Some intangible perks for the 1st place winner include hearing the self-penned song performed by others. Each year, in addition to the songwriting contest, the festival also sponsors a band competition and these two events are somewhat entwined. Here’s how.

The top four competing bands will each perform the winning song from the previous year’s songwriting contest. This performance takes place on Thursday of the festival as part of the judging of the band competition.

It’s a special thrill for songwriters to hear their winning song arranged and performed by multiple bands in front of a large audience. Those performances are recorded and provided to the writer. In addition, the writer’s own version of the song is provided to area radio stations to air with their bluegrass programming.

A special perk exists for those who don’t attain 1st place. A CD compilation of the Top 3 plus the next 5 runners-up songs are provided to each of Podunk’s Main Stage performing bands. Lyric sheets and contact data for the writers are also included.

Because there are several reasons why some writers may not want their song(s) provided to other performers, writers should indicate when submitting their entry if they don’t want their music included on the compilation.

Entries go through two levels of judging; the first level is to select the best five songs. Those five songs are then judged a second time to determine the top three who will receive a chance to perform at the Podunk Festival. All judges are prominent musicians, radio hosts or music instructors.

Performing at the festival is not mandatory for writers vying for first place and in no way will affect the outcome of judging. When a contestant is not available to perform their song during the on-stage portion of this contest, either a recording of their song will be played over the sound system for the audience or the song may be performed by the prevailing band competition winner or another band of Podunk’s choice.

As previously mentioned, the songwriting contest is tied to the band competition (sponsored by Telefunken Elektroakustik) and thereby the competing bands are required to perform the previous year’s winning song as part of their judged set.

The 2019 winning song There’s a Bear in the Barn written by Stan Keach of Rome, Maine will be performed by the top four band contestants on Thursday evening at the 2020 festival.

Entries must be postmarked by May 1.

To enter, submit the forms linked below along with a $25.00 entry fee per song. If you are sending more than one entry, you may mail the materials together in a single package. You may also write just one check to cover multiple entry fees.

Contest Deadline: Contestants must enter by May 1.