The Plate Scrapers originated in Western Maryland and are a four-piece string band performing traditional bluegrass and old-time tunes topped off with a helping or their own original material.  The band’s wide taste in music, ability to jam, and impeccable instrumentation will keep you coming back for seconds.

From the Boston, Mass area, its members bring a diverse musical background including training in classical violin and switch to old-time fiddle, a saxophonist who joined the band to play mandolin, and even a member who played electric bass in a heavy metal band with a transformation to upright bass.  After working on some acoustic arrangements to prepare for a one-off show the band started showcasing acoustic roots music in folk, bluegrass, and old-time music.  After adding additional members this five-piece band never looked back. 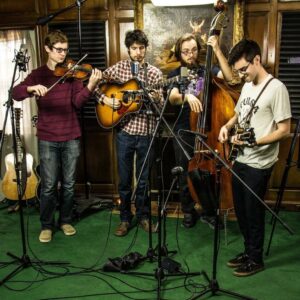 In their own words, Pretty Saro is an acoustic roots quartet based in Boston MA, fusing traditional styles with modern ideas to create a unique and exciting musical experience. The band is affiliated with Berklee School of Music and its members include Maxfield Anderson from Oklahoma, Alex Formento, New Jersey, Devon Gardner, Arizona, and Joe Everett, Ohio.
The contemporary quartet draws inspiration from traditional bluegrass and blends it with their diverse background to create a sound uniquely theirs. 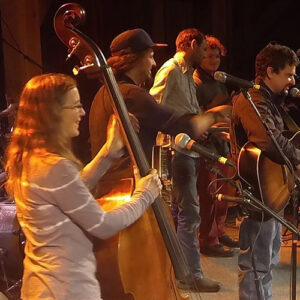 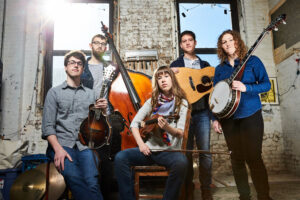 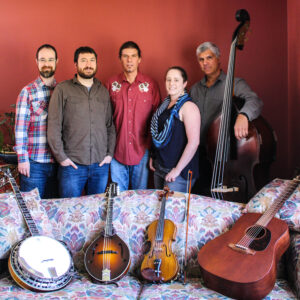 Five in the Chamber 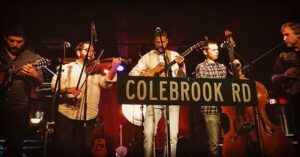 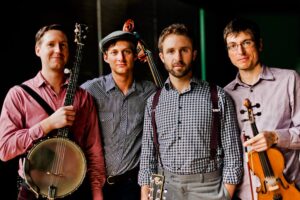 Don’t be fooled by the name. Three Tall Pines is an award winning quartet –playing bluegrass and Americana from the heart of New England. Though their faces are young, the group’s timeless originals and interpretations of traditional songs persuade listeners that bygone eras were just a short while ago. Impressive instrumentalists in their own right, they transcend their diverse musical backgrounds to achieve soulful harmonies and sensitive performances that draw audiences in and leave plenty of space for the story to shine through.

Recently the band has caught the eye of many critics in their first few years together. In 2011 they were named Bluegrass Band of the Year in by the Motif Arts Magazine and winner of the Ossipee Valley Bluegrass Festival band competition, securing them a slot on  the main stage in 2012.

The members of Three Tall Pines make diverse contributions to the quartet’s unique sound.  Bourdeau and Lurgio provide the raw material, offering up carefully crafted original songs, each with its own unique content and character. The quartet works as a group to shape each tune, seeking out ways to enhance and embellish its message. Lurgio’s classic, brilliant mandolin sound, Smith’s colorful, classic and bluegrass inspired fiddle, and Pangaro’s powerful rhythm and stylistic versatility all serve to enrich each heartfelt melody.

After two years of hard touring, Travers Chandler and Avery County stand ready to take their place in the bluegrass world as interpreters and progenitors of all that is old school in the music. Striving to please both the hardened traditionalist and to leave a footprint in the younger generation’s new acoustic scene, this band has begun to command attention.

The group came together in 2009 with the intent of preserving the legacies of bluegrass music’s lost heroes, while bringing these sounds to new audiences. Members have garnered much acclaim and IBMA accolades after stints with The James King Band, Danny Paisley and The Southern Grass, The Country Gentlemen, Spring Creek, Dave Evans, Karl Shiflett and The Big Country Show and numerous others prior to this conglomeration. They are now busily creating new music while delightfully hanging on to influences of the past.

Raised in New England, Katie left home at an early age to travel across the U.S. and Canada, and she lived in Alabama for a few years before returning to the Northeast to pursue her calling in music.  This experience greatly influenced her songwriting and became a major inspiration in her decision to embrace the bluegrass tradition.

In 2010, Katie formed the Two Time String Band with the intention of performing material from her CD. As the band found its compass, they settled into a more bluegrass-oriented style that has been greeted with overwhelming audience approval. The TTSB features upright bass, guitar, banjo, cello and fiddle. Come see them when they return to the main stage Saturday and Sunday this year.

Just weeks before winning the 2009 Podunk competition, PHB placed second at the Rockygrass band competition and they never looked back. The Athens, GA-based band mixes dark themes and old-time religion with a uniquely modern folk aesthetic that pins down just what American music is all about. The band released their new album “What Are We Gonna Do Now?” this year to rave review. But the Packway live show is really what brings the band to the forefront. Circling around two condenser mics, the guys deliver a high-energy show that wins them new fans everywhere they go.

2008 saw a completely different type of band top the competition. The Gold sisters – Analise, Jocelyn, and Shelby – lead the band with their strong instrumentation and stunning harmonies. Jocelyn was a finalist in the 2008 Chris Austin Songwriters Competition at MerleFest. The songwriting abilities of all three are clearly apparent on their new release “My Sisters and Me” on Rural Rhythm. The album broke into Billboard’s Top 50 Bluegrass Album list. The year the band is on the second ballot for two International Bluegrass Music Awards for Emerging Artist and Shelby is nominated for Female Vocalist. You can definitely expect to hear more from this young band in upcoming years.

You never know how the first year of something like a band competition will go, but Joy Kills Sorrow quickly set our minds at ease. The young Boston-based modern America string band impressed the judges with their strong vocals and instrumentation. Since then, vocalist Emma Beaton won the Canadian Folk Music Awards 2009 Young Performer of the Year and Jacob Jolliff, Berklee’s first full-scholarship mandolin student, joined the group. Sing Out! magazine deemed them the “‘poster children’ for the burgeoning Americana format.” Their new release “Darkness Sure Becomes This City” on Signature Sounds reveals a fresh, hip take on traditional music.

Shop on Amazon using this link and Podunk will receive a portion of the proceeds: